OUR NEW COLLECTION WITH 20% OFF

Every June 14th, millions of Americans across the country display or gather around the US national flag, celebrating the values it stands for. This day, known as Flag Day, is an opportunity to show your love for your country and your family and friends. And if you ask us, there’s no better way to do that than with a few flag-inspired designs. Here at ArtistShot, you’ll find thousands of them! 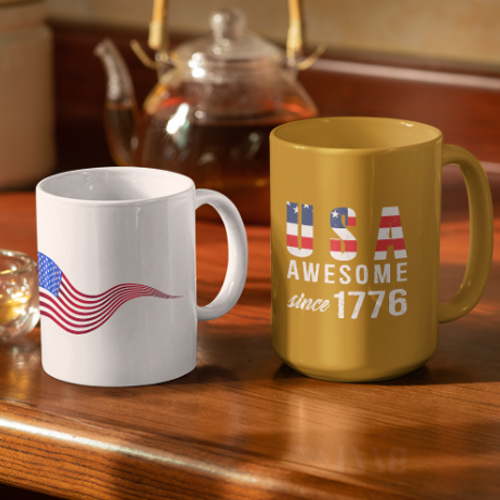 Exclusive and original coffee mugs are waiting for you. Pick the perfect design from our wide collection and buy a custom therefore unique mug.

Feel the flag day power with a special t-shirt. Great quality as well as endless designs created just for you. Be a true patriot and buy your flag t-shirt Now!

Why We Celebrate Flag Day

When the original thirteen colonies gained independence from the British rule, their first order of business was to create a new flag. On the 14th June 1777, the Second Continental Congress passed an act that determined what that flag would look like. The first version of “Stars and Stripes” had thirteen alternating red and white stripes and thirteen stars.

But Flag Day celebrations didn’t start until a century later — in 1861, the city of Hartford was the first to observe it. After that, the celebrations were quite sporadic until President Woodrow Wilson officially designated June 14th as the anniversary of the Flag Resolution. President Truman was ultimately the one who established Flag Day as we know it today — in 1949.

Nowadays, on Flag Day, all government buildings, schools, police and fire departments are required to fly the national flag. Citizens don’t have to, but many still do in order to express their patriotism. Across the country, people go to concerts, parades, and festivals held to celebrate this holiday. In addition, many museums have special Flag Day exhibitions which attract many visitors.

Flying the national flag from your home is a great way to show your patriotism, but it’s not the only one. This June 14th, go a step further and get some of the best Flag Day designs from ArtistShot. And while you’re at it, why not get something for your loved ones as well?

We have it all — cool ‘Stars and Stripes’ shirts, ‘I love America’ phone cases and bald eagle socks. If you really wanted to, you could dress up in USA-themed clothes from head to toe! Or dress someone else — we have sizes for everyone and items for both genders.

And do you know what the best part is? All our items are fully customizable. You can change everything — the color, the print size and alignment, even the design itself! We allow you to add your personal touch to every print, and make a new one from scratch! Find +1000 original arts and celebrate the best Flag Day of your life!